Great handball day today at Phibblestown… 5 women’s team ready to play their last tournament to conclude this 2014-2015 handball season. Games were played from 10.30 am to 2.30 pm and followed by a men game at 3.30 pm.

Few supporters made the early game to admire our Ladies performing including some very young ones which are in top form at this time in the morning! DI gets straight into the game and lead by 3 points just a few minutes into it thanks to a join effort from the back players. However they slightly relax the defence and let their opponent come back 1 single point behind. DI’s left back – Aleksandra Radzewicz – takes the problem in hand and brings solutions with 4 of the next 6 brilliant goals. Lughnasa’s defence starts focussing on the left backer just as Bettina Bordas in the centre finds the path to the goal and adds 4 of the next 5 goals to the board. Our ladies are now on the winning track for this game and keep doing some very good work in defence – note a very good performance from the line player – Ingrid Laursen – in this discipline. The refs end this game with 19-9 in favour of our ladies. Great performance from DI!

After having just lost to Lughnasa this morning the Northern Stars are decided to change the trend… The first half is very balanced – both teams exchange goals successively and run back to their 6 meter line to defend hard. On the side line – we can really feel a large desire to win from both parties. This will last for rest of the first half and continue for a good bit of the second half – great entertainment for the ladies’ supporters. At this stage DI’s line player – Ingrid Laursen – manages a great interception and run the open pitch to score. She follows with another 2 goals consecutive goals thanks to great team work with Bettina Bordas… DI is now in the lead. The right back – Roxane Jaffuel – continues this effort well helped by Bettina. The ref calls it done at 16 – 12 in the advantage of DI!
Our Ladies collected the 4 most important points of the season to get to the top of table after the last game!
DI’s Ladies are now Irish Champions! Congratulations to all of them!
Woman of the tournament: Aleksandra Radzewicz (8 goals)
Very good performance: Ingrid Laursen (5 goals), Roxane Jaffuel (8 goals) &  Bettina Bordas (10 goals)
Special thank you: Coach Eva Herczeg & Captain Gabriela Deac & of course the best supporters ever!
Some Photos of the All Ireland League Champion Winners! 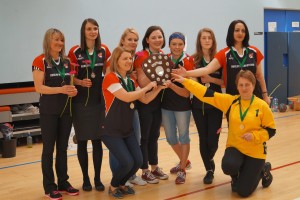 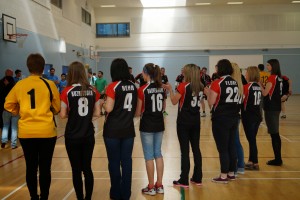 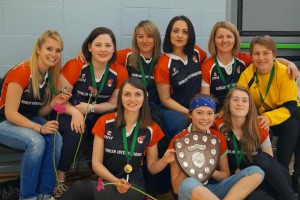 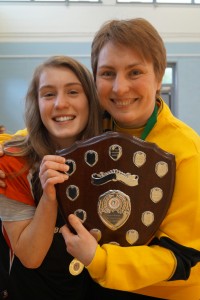