With an extremely successful season behind us, it is time to reward the individuals that made the team shine. With such strong team and performance this season, it was a very difficult choice.

Many players did perform very well and we are very fortunate to have a strong female team. Next season they will be attending the international Edinburgh Tournament to defend their title as reigning champions. On top of this, they also have to defend their All Irish Cup title and their National League title. No small challenge at all.

We can only be proud of the many great individuals that make up the team,  but one stod out in particular. In match after match she supported her team as a true teamplayer, she took responsibility when it was need at drove the ball where it needed to be (mostly into the goal). So it is with great pleasure that Thurian Le Guen, also known as Tutu, as the MVP of the female team for this season!

Below are pictures from when we surprised her with the award. As you see, she was very happy receiving this honor. She also let us know it was a first individual award and she was extremly grateful for this honor. She is now back in france, but has sent us pictures of her new trophy table.

Well done Tutu and thanks for all you have done for DI. We hope to have you back sometime. 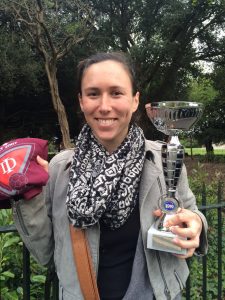 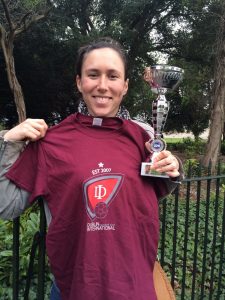 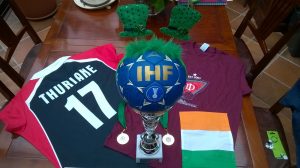