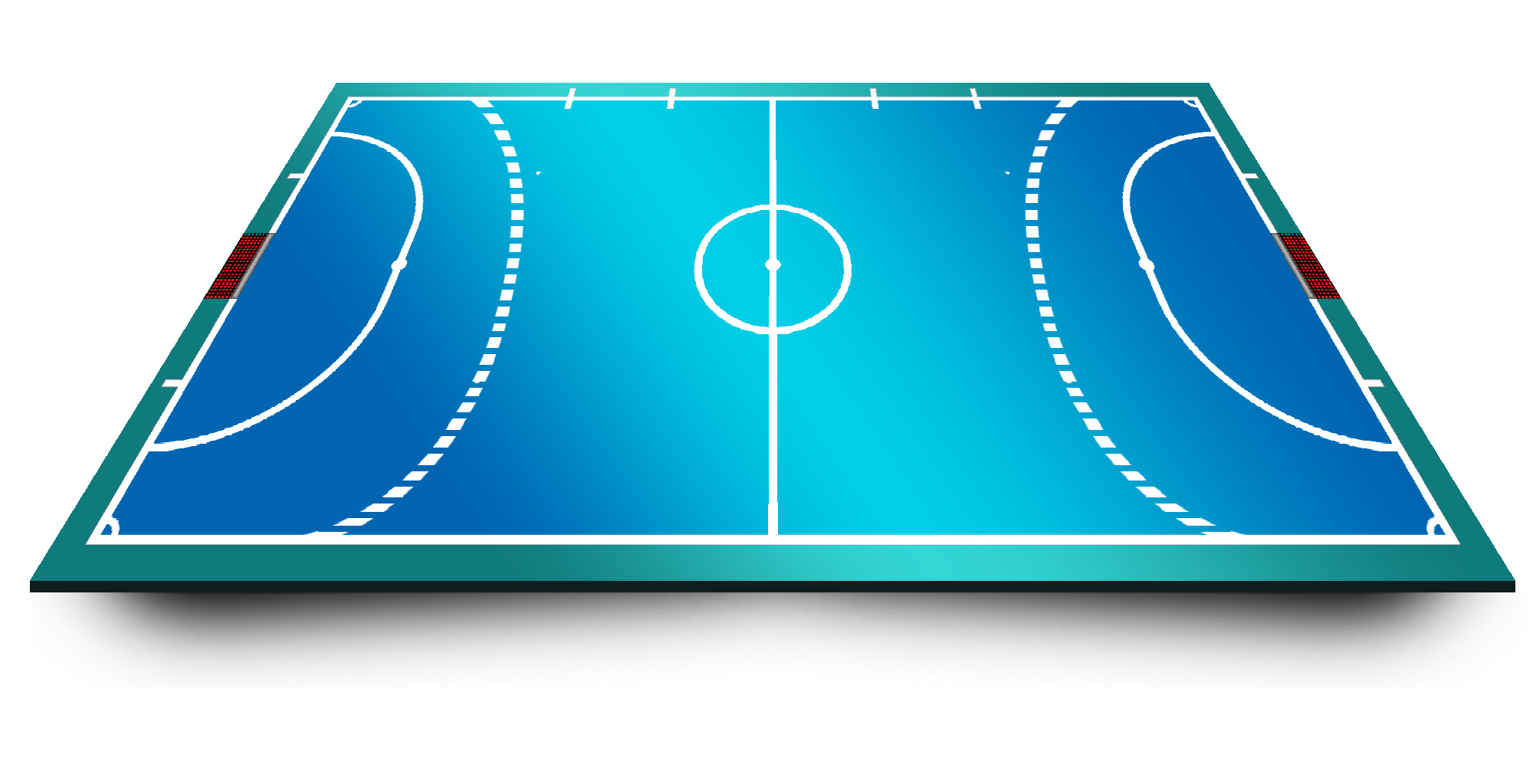 Handball is played on a court 40 by 20 metres (131 ft × 66 ft), with a goal in the centre of each end. The goals are surrounded by a near-semicircular area, called the zone or the crease, defined by a line six meters from the goal. A dashed near-semicircular line nine metres from the goal marks the free-throw line. Each line on the court is part of the area it encompasses. This implies that the middle line belongs to both halves at the same time.

The D-zone is delineated by two quarter circles with a radius of six meters around the far corners of each goal post and a connecting line parallel to the goal line. Only the defending goalkeepers is allowed inside these zones.

Outside of one long edge of the playing field to both sides of the middle line are the substitution areas for each team. The areas usually contain the benches as seating opportunities. Team officials, substitutes, and suspended players must wait within this area. The area always lies to the same side as the team’s own goal. During half-time, substitution areas are swapped. Any player entering or leaving the play must cross the substitution line which is part of the side line and extends 4.5 meters from the middle line to the team’s side. 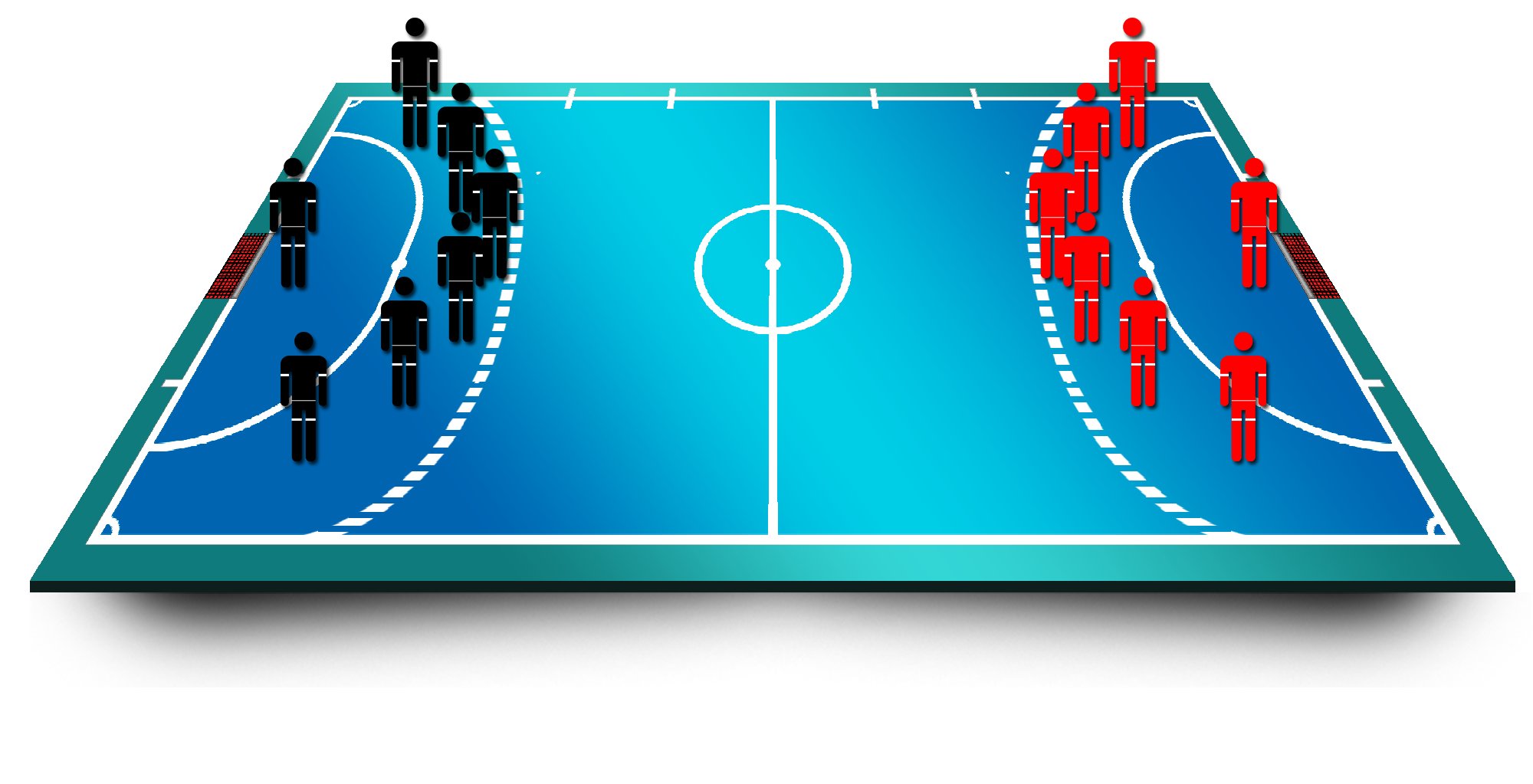 Each team consists of seven players on court and seven substitute players on the bench. One player on the court must be the designated goalkeeper, differing in his clothing from the rest of the field players. Substitution of players can be done in any number and at any time during game play. An exchange takes place over the substitution line. A prior notification of the referees is not necessary.

Field players are allowed to touch the ball with any part of their bodies above and including the knee. As in several other team sports, a distinction is made between catching and dribbling. A player who is in possession of the ball may stand stationary for only three seconds, and may take only three steps. They must then either shoot, pass, or dribble the ball. Taking more than three steps at any time is considered travelling, and results in a turnover. A player may dribble as many times as they want (though, since passing is faster, it is the preferred method of attack), as long as during each dribble the hand contacts only the top of the ball. Therefore, carrying is completely prohibited, and results in a turnover. After the dribble is picked up, the player has the right to another three seconds or three steps. The ball must then be passed or shot, as further holding or dribbling will result in a double dribble turnover and a free throw for the other team. Other offensive infractions that result in a turnover include charging, setting an illegal screen, or carrying the ball into the six-meter zone.

Only the goalkeepers are allowed to move freely within the goal perimeter, although they may not cross the goal perimeter line while carrying or dribbling the ball. Within the zone, they are allowed to touch the ball with all parts of their bodies including their feet. The goalkeepers may participate in the normal play of their teammates. They may be substituted by a regular field player if their team elects to use this scheme in order to outnumber the defending players. This field player becomes the designated goalkeeper on the court; and must wear some vest or bib to be identified as such.

If either goalkeeper deflects the ball over the outer goal line, their team stays in possession of the ball, in contrast to other sports like soccer. The goalkeeper resumes the play with a throw from within the zone (“goalkeeper throw”). Passing to one’s own goalkeeper results in a turnover. Throwing the ball against the head of the goalkeeper when he is not moving is to be punished by disqualification (“red card”).

Each team is allowed to have a maximum of four team officials seated on the benches. An official is anybody who is neither player nor substitute. One official must be the designated representative who is usually the team manager. The representative may call a team timeout once every period and may address the scorekeeper, timekeeper, and referees. As of 2012, the representative may call a total of three team timeouts, with a maximum of two per period or overtime. Other officials typically include physicians or managers. Neither official is allowed to enter the playing court without the permission of the referees. 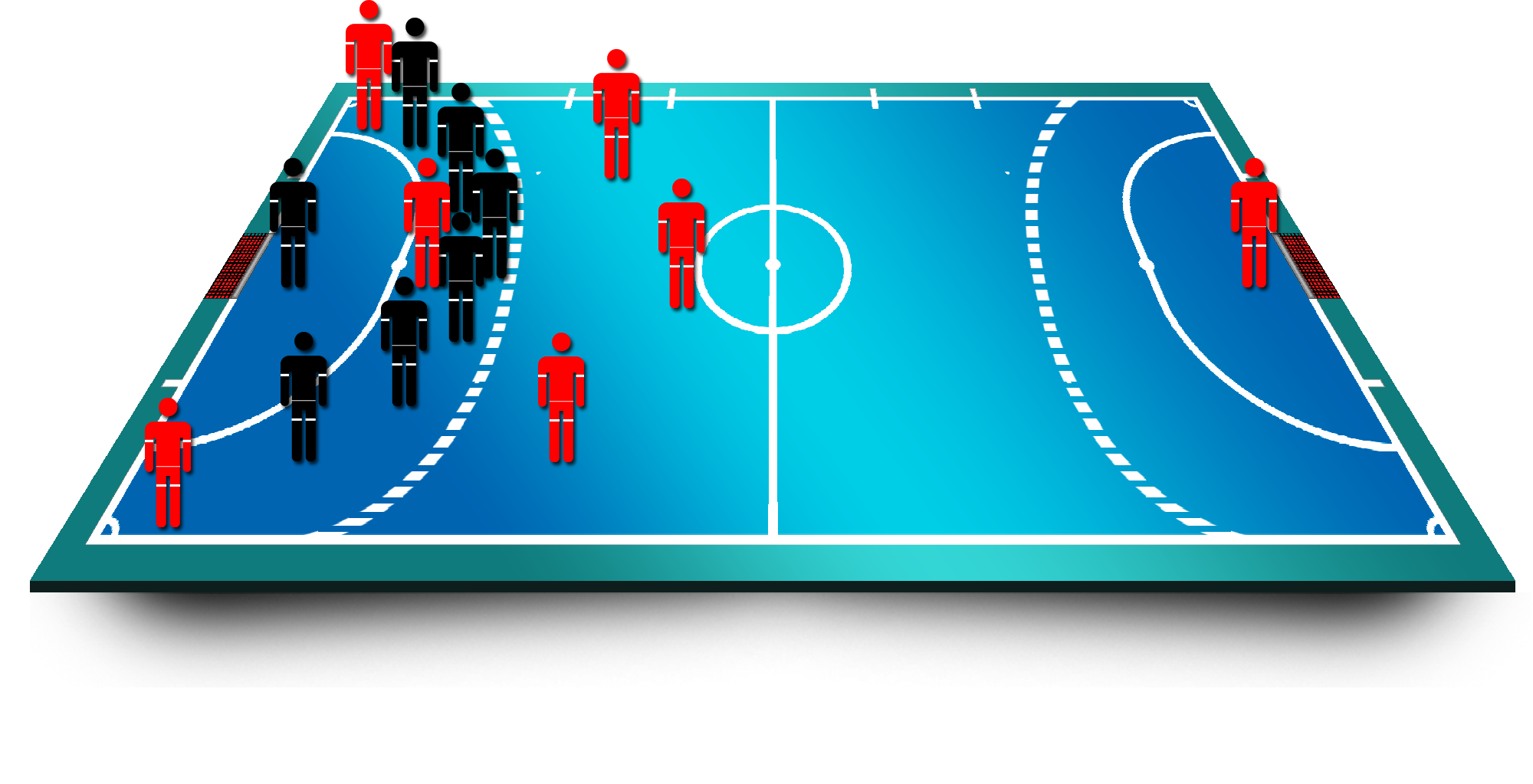 Players are typically referred to by the position they are playing. The positions are always denoted from the view of the respective goalkeeper, so that a defender on the right opposes an attacker on the left. However, not all of the following positions may be occupied depending on the formation or potential suspensions.

Left and right wingman. These typically are fast players who excel at ball control and wide jumps from the outside of the goal perimeter in order to get into a better shooting angle at the goal. Teams usually try to occupy the left position with a right-handed player and vice versa.
Left and right backcourt. Goal attempts by these players are typically made by jumping high and shooting over the defenders. Thus, it is usually advantageous to have tall players with a powerful shot for these positions.
Centre backcourt. A player with experience is preferred on this position who acts as playmaker and the handball equivalent of a basketball point guard.
Pivot (left and right, if applicable). This player tends to intermingle with the defence, setting picks and attempting to disrupt the defence’s formation. This positions requires the least jumping skills; but ball control and physical strength are an advantage.