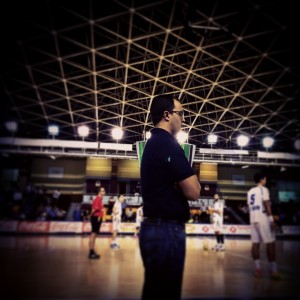 Dani is 34 years of age and has been coaching handball since the age of 15 and has played in the goals before that. He is originally from Villadolid in the north of Spain but now lives in Leon where he is involved as a coach in Ademar Leon Handball Club – home club of world class players like Entrerrios, Julen Aguinagalde, Carlos Ruesga, Antonio García, Venio Losert, Iker Romero, Juanin García, etc… He started coaching teams in 2007 for Ademar Leon before he was given the task of assistant coach for the season 2012/2013 when Ademar finished 4th in the Asobal League (1st spanish league) and got to participate in the European Champions League. He then became the head coach for 2 consecutive seasons for Ademar while the team played in the Asobal League.

Dani offered some great game construction plans piece by piece during the training for the enjoyment of all players. 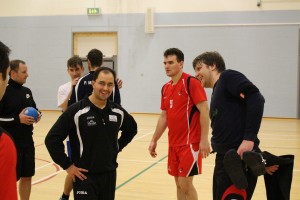 He confessed “Handball is my life. In fact it has always been, and I hope it will be like that in the future”. We could tell that is true and we hope that Dani’s future will be in Ireland coaching DI in his spare time!

Thank you for the visit – you are welcome back anytime.